I’ve been hearing from my homies in California that winter weather has arrived, so make sure you stay warm and dry if you’re there! Down here we’ve been welcoming spring for the past few weeks, which means that instead of pouring rain and biting winds we’ve got 35° C temperatures and a whole lot of sunshine.

It’s kind of ironic then that I spent last Saturday hiking up a snow-covered volcano. That’s right, I climbed this baby:

Volcán Villarrica is an active volcano near the city of Pucón. Trekking up it has been the most grueling physical task I’ve ever put my body through. It took about five hours to go up and coming down (first on sketch toboggans and then by walking some more) took another one to two. I thought the experience was completely worth the soreness as it was both awe-inspiring and humbling. Some advice before you don your ski gear: it would help a lot if you were healthy and physically fit before you give it a go (our tour agency didn’t ask about our medical histories or have us sign waivers so it’s ultimately your decision; use your best judgement).

Even though there were several groups of climbers it was so quiet up there; all you could really hear was the wind and the crunch of snow under our boots as we dragged ourselves up the mountainside. I had made the mistake of wearing a lot of layers–you would think it’d be necessary to bundle up. By the time we finished 3/4 of the hike I was in a shirt and yoga pants. Coming down the volcano was the really fun part. We were each given this tiny plastic toboggan that looked like this:

When the slope was steep we would slide down without using the toboggans. To break we would use our ice picks by digging the sharp end into the snow and holding it there with our arm. After coming back down I was thoroughly sun burnt. Despite wearing layers of sunblock and applying them often my face spent the next week looking red and peeling. No bueno :( but it could have been worse.

Hmm, so I noticed I just jumped into the volcano story without giving you guys any context. Now that I’ve got your attention (see what I did there?), let me start at the beginning. I went to Pucón last weekend with a group of 30 study abroad kids. We arrived early Friday morning after an 8 hour bus ride from Santiago. It had been raining the night before but by the time the bus attendants woke us up as we pulled up to the terminal we saw that we were in luck: the sky was the bluest I had seen in Chile since my trip north, the sun was shining but the air was cool, and most importantly there was no sign of any Santiaguino smog.

After dropping everything off at the hostel my friends and I went to grab some breakfast. As we walked around the main streets I was struck by their simple charm. Pucón is one of the more touristy cities I’ve seen–most of its streets were filled with fancy-looking restaurants, cafes and shops–but there was something about its buildings being constructed chiefly out of wood that lent it an air of graceful ruggedness. Picture a city like South Lake Tahoe in the summer and you might get an idea of what Pucón was like. Alternatively, you can check out these pictures!

Later in the afternoon we went on a hike in the forest around Pucón. It was so refreshing to be in the woods again! Reminded me a lot of Nor Cal :) After that we headed out to one of the nearby lakes and had some time to chill near the water. 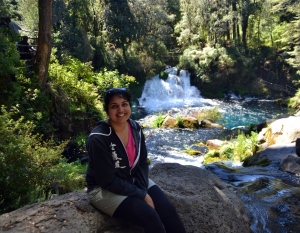 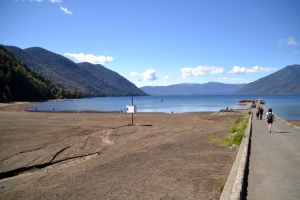 The following day was our volcano climb, which I already talked about, so that leaves Sunday. This trip was about a lot of “firsts”. Besides climbing a volcano I had also never zip-lined before so it was really cool to be able to do both in one weekend.

I absolutely loved this! It was really cool because the six of us who went had the whole place to ourselves (there was nobody else around). This meant we got to take our time with the course and really savor the experience. At one point we went back and forth over a river which was awesome. I’ve decided that I’m going to try out zip-lining whenever I can. I’ve heard of courses that also involve hiking, climbing and walking over sketch bridges…that’ll be my next one!

After zip-lining we had a few hours to kill before our bus left for Santiago, so my friends and I spent that time walking by the lakeside and shopping in the local feria (artisan market). 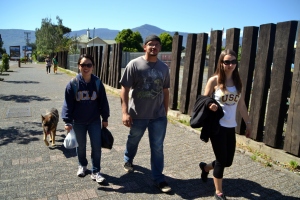 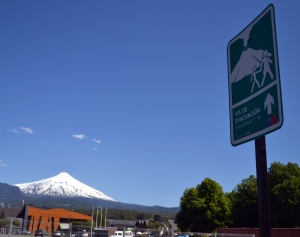 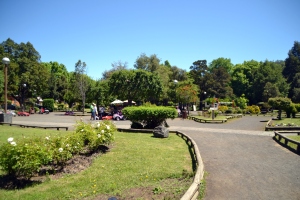 Even though I only spent three days there, Pucón has become one of my favorite places in Chile. I highly recommend visiting it if you have the time, especially if you love the outdoors. When the weather is warm you have a lot of things to do–hikes, boat rides and other lake activities, rafting, etc. In the winter months Volcán Villarrica opens ski lanes but we were told that only professional skiers tackle the slopes. There are a few geothermal springs in the area as well so that might be another thing to try when the weather is colder.

That’s pretty much everything about this trip south! Oh, speaking of south, this was the most..er..south I’ve been so far! I’ve said it a couple of times but it’s worth mentioning again: Chile is such a long country that making sure you hit every part can be tricky. I have plans to go all the way down to the very tip of Chile in January and I’ll post more information about that once I’ve got the details ironed out. My next post will be about a three-part adventure I had yesterday so check back for that. Until next time, ¡chao! :)