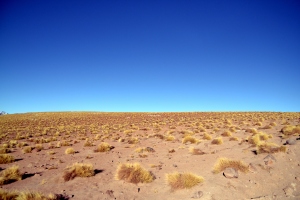 Hope you guys are sitting somewhere nice and cool because I have quite a few stories about my desert adventures to share with y’all! As the title suggests, I’m breaking up the trip into different posts so as to keep things on the shorter side.

I came back about a week and a half ago from my nine day trip to el norte grande, or “the far north” of Chile, really tired from constantly being on the move but super glad I got to see a lot of things in a short amount of time. Our group visited three major cities–San Pedro de Atacama, Arica, and Iquique–and a handful of smaller towns like Toconao and Putre.

Our first stop was San Pedro, a desert pueblo on the edge of Chile’s largest salt flat, el Salar de Atacama. I was told that this was northern Chile’s #1 tourist hub so I never expected it to be so tiny–we walked straight through the downtown and didn’t even know it! The centro consists of a main street with smaller lanes branching off of it, a beautiful plaza, and a quaint church. If you don’t like dirt or sand, you might not like San Pedro: everything from the ground to the buildings (which are super cute by the way, and all made from adobe) to the people is covered with dust. Even though it’s small, or maybe because of it, every building is either a tour agency, a restaurant or a souvenir shop, and since this is the biggest town around for miles things tend to be more expensive. Over the entire trip we kept costs low by staying in hostels instead of hotels and cooking our own food with ingredients from local markets and convenience stores. This was a great experience since we got to know each other really well (none of us knew one another before coming to Chile); I love bonding over food!

Knowing we only had a short time in San Pedro–just three days!–we tried to use our time efficiently. The first day I did something I’ve been wanting to do ever since I first laid my hands on my Lonely Planet guide…go sandboarding! 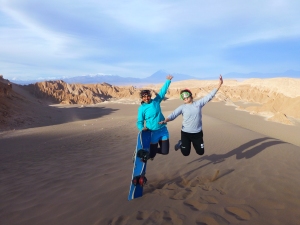 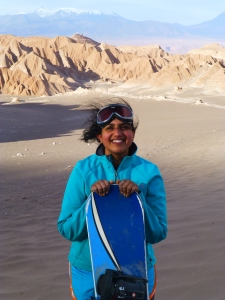 In case it isn’t obvious, sandboarding is essentially snowboarding…except on sand! We drove into Valle de la Muerte (Death Valley) around 3 pm, strapped on our boards, got a very basic lesson from our “instructor” (“All you guys need to know is you lean forward to stop”), and spent the next two hours riding (or rolling) down the sand dune. I loved every part of this experience save one. Can you guess what that was? Nope, it wasn’t the falling. That was actually pretty fun (minus all the sand in your face). The lame part was climbing back up the hill…no “ski lifts” here! But the rush on the way down was so strong that, while leaving you out of breath, it helped get you back to the top before you could say, “my legs are going to kill me tomorrow”. Sandboarding isn’t as hard as it looks (I’ll admit I was scared at first…) and even the falls aren’t bad. Another plus: we all thought we’d be sore the next day but we were totally fine!

After sandboarding, we headed over to Valle de la Luna (Moon Valley) to see the sunset: 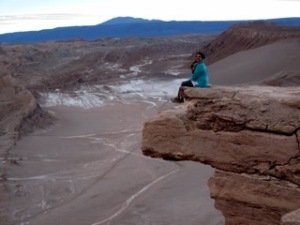