Here you’ll find detailed information about my stay in Bangkok, Thailand. If you have any questions, feel free to ask them in the comments section!

In Bangkok I stayed at Saphaipae Hostel. Here’s how it fared:

Security 5/5 – you need a keycard to active the door to the lift and the door to your room; the reception is open 24/7

Location 2/5 – the easiest way to get to most of the city’s attractions are by tuk-tuk or taxi; there’s a Holidy Inn nearby, which  means there are a lot of tuk-tuk and taxi drivers that try to rip you off; the hostel is located very close to a freeway entrance, and traffic at rush hour is horrendous; however there is a very good restaurant just down the street

Staff 4/5 – very nice; we had issues with our door lock and shower and those were addressed immediately

Atmosphere 5/5 – it has its own restaurant; the common area is filled with games, books, DVDs, computers, and lots of chairs and desks

Cleanliness 4/5 – rooms are clean, but lighting is pretty dim

Facilities 5/5 – breakfast is included; each room has a small locker; there is a tour agency located inside the hostel where you can book buses to other cities in and around Thailand; ATM machine inside

Overall value 4/5 – if you don’t mind taking a tuk-tuk or taxi around, this is a good, quiet hostel

How I got around

Tuk-tuks and taxis are readily available. If you can, flag down a moving vehicle as there are plenty of scammers waiting around popular tourist areas. For taxis make sure the driver has the meter running; if he refuses to or claims it’s broken flag down another one, there are plenty. For tuk-tuks don’t fall for tourist traps; drivers will claim to take you to all the city’s attractions for a low price, however they will either take you to the less popular ones or just drive you to a tourist agency that will try to persuade you to take one of their tours. I learned this the hard way: our first tuk-tuk driver ignored us when we told him where we wanted to go and instead took us to a tour agency where he earned a commission. In our case we simply walked away without paying the tuk-tuk driver, and caught a taxi from down the road. Be assertive.

Taxis were more reliable, for the most part. We had an odd experience one evening while taking a taxi back to our hostel, and unfortunately forgot to ask the staff working there if it was normal or if we got scammed. Around 6 PM we tried flagging down a taxi near the Grand Palace and asked the driver if he could drop us off at our hostel. He, along with the next three taxis, told us that it would cost a flat ฿200. We said no to each of them, since we were told the fare should always be metered, and because the taxi that took us to the Grand Palace in the morning was ฿70.

Since it happened four times, we figured it was either a legitimate rush hour surcharge or all taxi drivers in this area had an agreement to tell tourists the same thing in order to get more money. Either way it was getting dark, so when the fifth taxi came by we agreed to the fare and got in. The distance to our hostel was only 8 km, yet it took us close to two hours to get back, because of jams and backlogs; according to our driver our neighborhood was notorious for rush hour traffic. Though we were paying a flat fee the meter was on and underneath the handkerchief that was being used to cover the fare I noticed that the price had come to ฿150 when we were a block away from the hostel. We still aren’t sure if the flat fee is common during rush hour or not, so comment below if you know!

Bangkok’s skyrail is said to be convenient and easy to use, but we only traveled by taxis because they were more cost-effective. Taking the ferry is a very fun way to explore the city (and stay cool on a hot day). There are a number of stops by the river, and signs will tell you which boat line to take, where it goes, and how much a ticket costs.

If you arrive in Bangkok by plane, you can take the skyrail to downtown. You should check to see what time the last train departs, since it does not run 24/7. If you want to take a taxi note that in addition to the metered fare there is a ฿50 ($1.43) surcharge (check with the taxi stand before leaving the airport) and you are responsible for all tolls (approximately ฿75 or $2.15). The driver may insist on a higher surcharge, like ours did, but be firm.

OVERVIEW: We had three full days in Bangkok. Given the amount of things to see and do, it’s enough if you’re comfortable with packing your day with a lot of activities. Having already done that in Tokyo we opted for a lighter schedule, and even though we missed out on a couple of things, we enjoyed taking it slow. At our pace, four days would have been the perfect amount of time.

DAY ONE: We mostly relaxed to recover from our short but hectic stay in Tokyo. We walked around the neighborhood; had lunch at Ban Chiang, a restaurant right next door to our hostel that was very, very good; and bought snacks from a nearby 7-Eleven (there was at least one, if not more, on every block). Our hostel hosted a tour agency so we bought our bus tickets to Siem Reap, Cambodia. 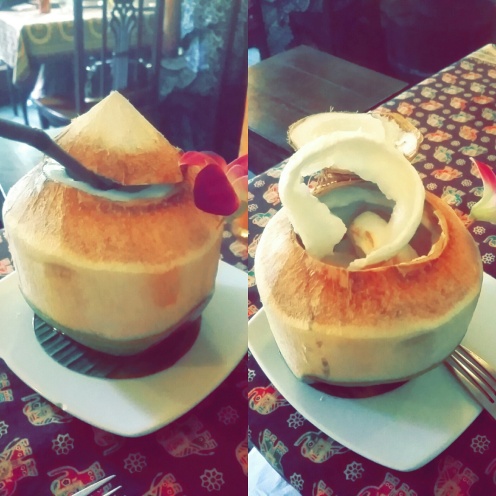 I ordered coconut water at Ban Chiang and it came in an actual coconut! Afterwards I asked the waiter if I could have the coconut meat inside and he carved it for me <3 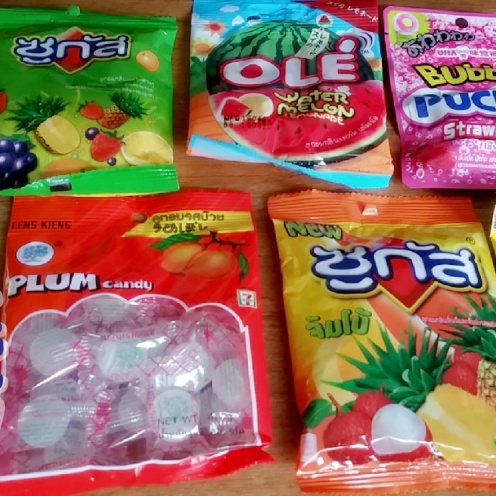 DAY TWO: We spent about three hours exploring the Grand Palace and then walked to Wat Pho where we spent another hour. For lunch we stopped by a restaurant down the street from Wat Pho and had some more good food (I can get used to this…). 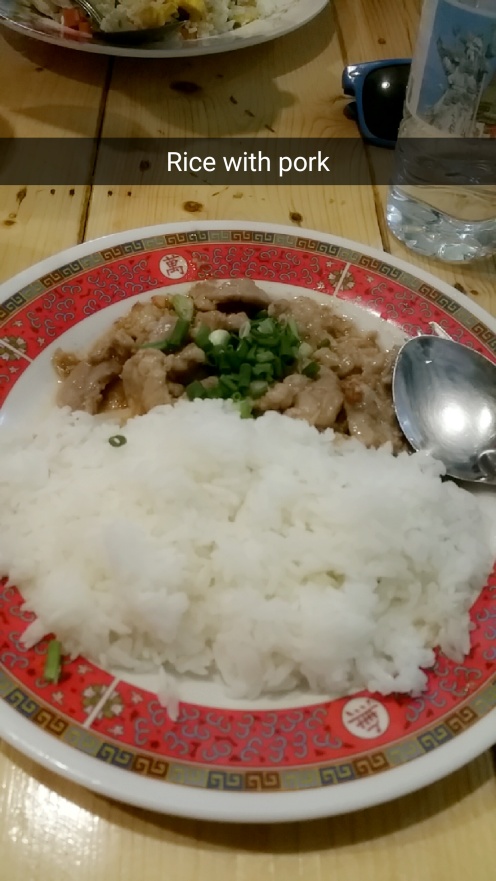 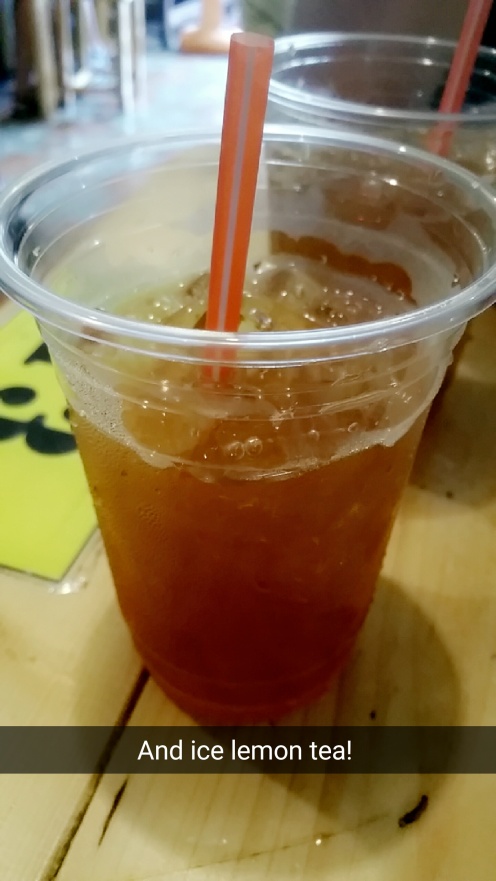 DAY THREE: Today was our longest day exploring Bangkok. We started with a visit to Wat Arun (Temple of Dawn), and spent about an hour there. I would recommend going in the evening when you can see the city lights from across the water. Next we took a ferry to cross the river, and instead of taking a tuk-tuk or taxi up to Khao San Road we took a ferry instead. Khao San Road is known for having cheap accommodations, food, and shopping, which is why you’ll find most backpackers there. We cooled down and caught our breath at a restaurant, did some souvenir shopping, tried some street food, and headed home.

If you’re buying things on the street, don’t be afraid to haggle. I usually start with 50% of the asking price and work my way up. That being said, it’s good to recognize that whatever they’re asking you to pay, as long as your currency is stronger, is still going to be cheap. I get that it’s “the principle of the thing”, but pick your battles and don’t worry about it too much. 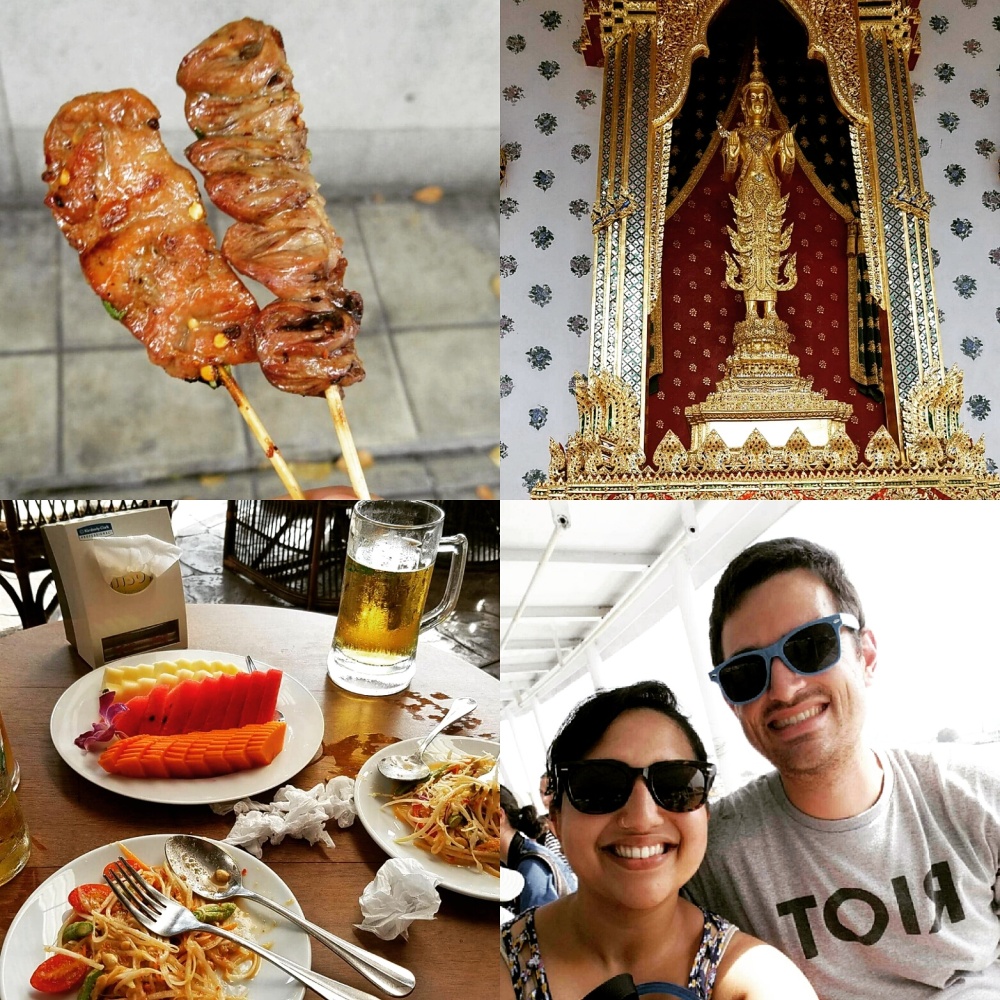 If you have questions about something I didn’t address, feel free to ask them in the comments section!